I have translated the last post of a recently killed Ukrainian soldier, who used to be a fairly well known restorer and photo blogger in Kyiv before the war. The original, written in Russian, is truly harrowing:

What do you know about fear?

The whistle of bullets overhead. The muffled thumps as they hit the ground next to you. The ricochets from the branches of an old black locust tree.

The rumble of the afterburner of a plane that comes at you to launch missiles.

The sound of a diesel engine of the tank, which has long been maneuvering somewhere 600 meters away, in the milk of thick fog, preparing to fire. And it sees you in its powerful thermal imager, it knows where you are. And you hear the clanging of its tracks, the rumble of the engine ... then deathly silence and an explosion. Just explosion, because you don't hear the sound of a shot.

The vibration of the air from the helicopters, which, invisibly to you, assume the position for a rocket strike from behind the trees.

Someone spotted red dots in the grove in front of us, in their shitty thermal imager. To shoot or not to?

The long whistle of a 152 mm that flies along an elliptical trajectory in your direction, and all you can do is fall to the ground and pray.

The abrupt smack of the mortar and the whistling before that - so short you don't always have time to fall to the ground.

The hissing in your radio, incomprehensible word fragments can be barely picked out. You have to climb out of the foxhole and stand fully up for a better reception - what if you have to be running away already?

Explosions are getting closer and closer. More and more dirt poured on your head. Fragments whistle by increasingly louder. The artillery correction drone floats in the sky over you day after day, simply doing its job. Every next blast can be your last, but what can you do? The luck of the draw.

The rustle of bulrush in front of you. The crunch of branches a few meters from the parapet of a freshly dug and such a shallow foxhole. The ghostly silhouettes in the shimmering moonlight that you see because you haven't slept for two days while being shot at from everything that shoots. Your swollen eyes, still veiled after the thermal imaging camera. Your buzzing head, full of terrible, fearful thoughts. The stare of your brother in arms, in which, as in the mirror, you see the animal fear of dying in this damned mud of goddamn Donbas.

And what do you know about fear?

The top comment under his post is by his Russian friend from St Petersburg - she says that in grief she went through their whole message history, and that he always wanted to visit.

Just some WWI level shit harmless peaceful people get sucked into. It was supposed to remain in Remarque's books. 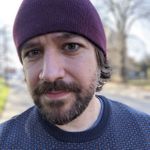